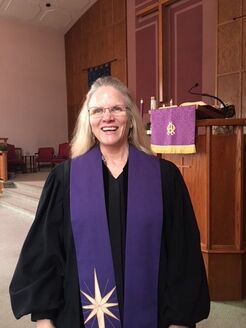 Rev. Laura Hollister is a pastor, counselor, and retreat leader. She especially enjoys growing in relationship with others through her faith in Christ, and helping others via Bowen Family Systems Theory.

Prior to entering the ministry, Laura enjoyed a 19-year career in publishing. She spent her final eight years in that field working as an advertising executive for The Washington Post, where she won awards for excellence in leadership, productivity, and character. It was while she worked at “The Post” that Laura met Christ. Inspired by her faith, she moved to Los Angeles to attend Fuller Seminary, then entered the ministry.

Laura has a special heart for those in the margins, expressed in her work as Associate Pastor to the multicultural Twin Cities, MN, congregation Church of All Nations; as Chaplain Resident at the St. Cloud, MN, Veterans Administration Medical Center where she provided spiritual care to combat veterans; and as solo pastor to First Presbyterian Church of Schuyler, NE, where she helped the congregation reach out to recent Latino and African immigrants in the community.

In 2009, while in Nebraska, Laura’s family brought her father—who’d long battled Parkinson’s, to live near her. As she was far from family, Laura considered this a gift from God. Thus, with her father’s death in 2013, she realized a call to help strengthen families—and returned to Maryland to be closer to her own.

In June 2017, Laura completed the 3-year post-grad. program in Bowen Family Systems Theory at the Georgetown Center for the Study of the Family. In 2019 Laura completed her MS in Clinical Mental Health at Loyola University (Baltimore), then passed her Maryland counseling law exam with flying colors - thanks to the prayers of the Berwyn congregation, and received her Maryland counseling license. She provides counseling services for 20 hours/week at Family Services Inc. -- a community services agency in Gaithersburg, MD, and continues to feel blessed to lead and serve God as part-time pastor to the congregation of Berwyn Presbyterian Church. Laura finds joy in spending time with family, friends, and her two charming cats. She also loves hiking and the arts.

​Our Custodian
Michael (Mike) Ford is our new custodian. He was born and raised in the metropolitan area and is a father and step-dad of 2. Mike works full time as a bus mechanic for Martz group in addition to his work at BPC.  In his spare time he enjoys cooking and helping others in the community.
​